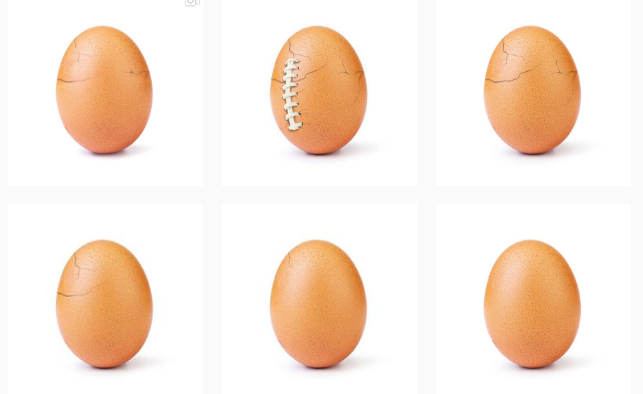 The egg that broke records and garnered significant global attention used its fame to promote mental health in one of the world’s biggest marketing campaigns to date.

On January 5, the world_record_egg Instagram account published the “most liked post” to date by beating a picture of celebrity Kylie Jenner and her infant daughter with just a simple picture of an egg – it achieved this in just 10 days.

Over the next few weeks, the egg began to crack, drawing global interest and media speculation over both the message and the price behind it.

Phew! I feel so much better now 😊 If you’re feeling the pressure, visit talkingegg.info to find out more. Let’s build this list together 🙌 #EggGang #WeGotThis #TalkingEgg

“Recently I’ve started to crack,” the final message said to 9.6 million followers. “The pressure of social media is getting to me. If you’re struggling too, talk to someone.”

The short animation of the egg, dubbed Eugene, then directs viewers to its site where mental health institutions across the world have been listed. Australian viewers can access Sane, Beyondblue and Headspace through this platform.

“Go big or go home”: How to make a successful awareness campaign

The celebrity partnerships that work and how to master them

The rights to the final message was speculated to be worth as much as AUD $13.7 million. A staffer at Need to Impeach said he was approached with the idea of having US President Donald Trump jump out of the egg and do the chicken dance, with the words “Impeach Trump” overhead. This he passed on, citing it was “crazy”.

Egg-cellent work from our friends @MentalHealthAm and great to see everyone #TalkingEgg “If you’re struggling too, talk to someone. We got this.”https://t.co/pn821UJnIe

Instead, its founder was approached by Hulu, the streaming service responsible for airing the Super Bowl. Just a day prior to the US football game, the egg said: “All will be revealed this Sunday following the Super Bowl. Watch it first, only on @hulu.”

The man behind the egg, Chris Godfrey, an advertising creative working in London, stayed anonymous until after the egg’s message. He and friends Alissa Khan-Whelan and C.J. Brown said it was it was a “dream” to have this opportunity.

“People have fallen in love with this egg, and Eugene the egg wants to continue to spread positive messages,” Khan-Whelan told The New York Times.

“We’ve had plenty of amazing offers and opportunities that have come to the table. So many. We’ve not really been sharing details because we don’t think this is about us. This is about Eugene the egg and what the egg can do.”

Tags:
Previous Article
Is volunteering in steep decline?
Next Article
“Democracy is for sale”: Charities miss out in donation records

“Democracy is for sale”: Charities miss out in donation records
Naomi Neilson February 5, 2019