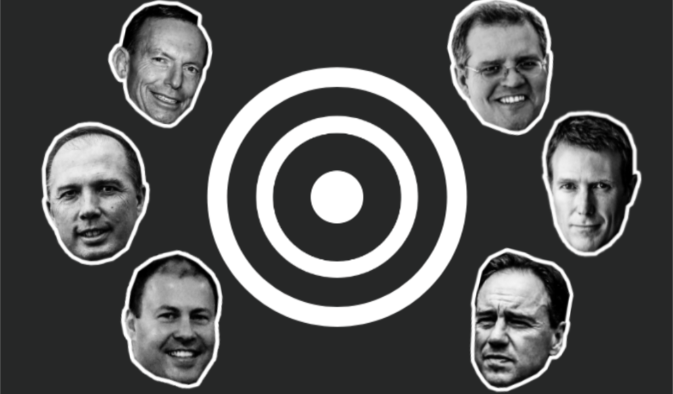 Major activism body GetUp will take on far-right conservative Coalition MPs as part of a new campaign designed to see the most unpopular kicked out of office.

The organisation has asked the public to pick three of 18 Coalition MPs for it to “target” as the federal election looms, with the intent being to challenge the “out of date” views on climate change, immigration policy and on a range of social justice issues.

“The hard right of the Coalition are holding back on progress on the issues that matter most. Whether it’s action on climate change, or evacuating the camps on Manus and Nauru, we won’t see the change we need while the hard right has power,” GetUp said.

Abbott has been particularly targeted in this campaign, with GetUp listing him for views that climate change is “probably doing good”, for wanting to make it illegal to protest against Adani and to “keep kids locked up in offshore detention”.

Other MPs have come under fire for their support of Abbott. Boothby MP Nicolle Flint was listed for saying Abbott was “the thinking person’s Prime Minister”.

Federal Member for Menzies, Kevin Andrews, is also targeted for being a big supporter of Abbott. He has also been listed as a potential target for overturning Australia’s first assisted dying laws and for his calls for gay conversion therapy to be common practice.

GetUp National Director, Paul Oosting, told The Guardian that voters in electorates of those targeted may be in touch with them. He said the election is going to be “huge” and there were volunteers and supporters ready to target the chosen MPs.

“Led by our members we will be holding candidates to account on the key policy areas essential for Australia to be fair, flourishing and just,” he told Guardian Australia.

“We have a groundswell of enthusiasm and people everywhere are fed up with out-of-date politicians blocking meaningful action on the issues they care about.”