Leading not-for-profits and social enterprises were awarded $5.5 million through a Google.org program for their innovation in technology

Google.org has divvied up $5.5 million in grants to innovative not-for-profit and social enterprise groups working with technology to make a difference.

The Google.org Impact Challenge supports the next generation of Australians through innovative ideas spearheaded by charitable organisations, from ensuring that people with disabilities find employment to rolling out user-friendly databases and apps.

Jacquelline Fuller, Vice President of Google and President of Google.org, said: “Every time we come [to Australia], we are blown away by the quality of the applications that we see and we always leave feeling that there is much more that we can do.

“We have seen some really deep investments in technology in areas like business and communication, but we think some of the most exciting applications of innovation and technology is happening in the areas of social impact.” 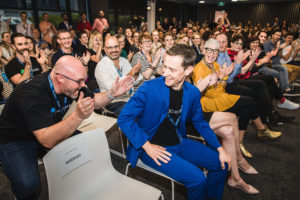 Google.org narrowed down 350 submissions to 10 finalists who received $250,000 in funding. The four winners – HireUp, Humanitix, Orange Sky and Xceptional – were also given an additional $750,000 and training through a Google partnership.

People’s Choice winner, Orange Sky, will use the grant to make technology a priority, including rolling it out to other not-for-profits. Co-Founder, Nicholas Marchesi, told Third Sector that it will better achieve this through the Google training program.

“Google is a world leader in using technology to help people, and the not-for-profit sector is ripe for digital transformation. To be part of that, and in a place that is the best in the world for doing that, we couldn’t ask for anyone better to work with.”

Founder and CEO of social enterprise Xceptional, Mike Tozer, said the organisation will use the grant to roll out and expand an app that connects people with autism to IT jobs. He suggested that other social enterprises and not-for-profits wanting to apply for grants should “think big and take the big, scary risks that frighten you”.

“It’s thinking not just ‘what am I going to do in the next six months or the next year’ but how we’re going to transfer work with places like Google in partnership with people you’re going to be helping, so my suggestion is to think long-term.” 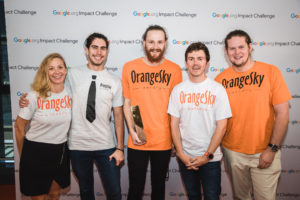 CEO and Co-Founder of HireUp, Jordan O’Reilly, said the grant will help to expand the platform to see more people with disabilities find employment.

To stand out from the 350 other applicants, O’Reilly told Third Sector: “The scale and the impact that it is having in such a short amount of time, and with 50,000 people registered all across the country and 1.5 million hours of support lodged, is how we got the application across and it’s just talking about how we want to get it to more people.”

OzHarvest was one of the six finalists that won a $250,000 grant after a gruelling application process in which applicants went through an interview process and were probed extensively on their innovation and technology behind each program.

With the funding, OzHarvest will combat food waste and food inequality by rolling out an app to better connect places with food to charities who can distribute it. Using a “virtual yellow van”, the app will see more food go to people who need it.

CEO Ronni Kahn said: “Our OzHarvest app is the solution. It is the digital approach with a human heart to get good food to people in need while helping the environment.”