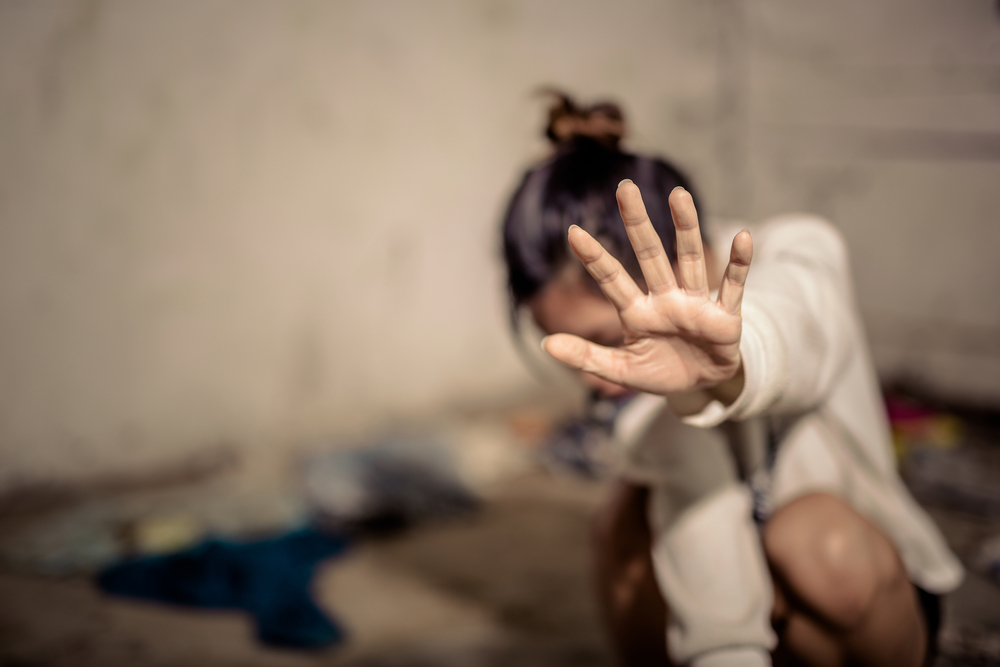 Australian aid organisations have apologised to victims of sexual harassment and abuse after a report found 31 of 76 incidents sustained allegations against workers.

The Australian Council for International Development (ACFID) responded to findings of an independent review into the practice and response of the ACFID’s 119 members in the prevention of sexual misconduct both internally and externally.

The ACFID statement said: “On behalf of ACFID and its membership, we would like to acknowledge and apologise to the victim/survivors of sexual misconduct who have been harmed – both those we work alongside and those we exist to protect and support.

“We are not able to undo that harm, but as leaders we can act in unity to listen and prevent harm in the future. We are crystal-clear that the path of resolution, redress and change will be formed by your experiences.” 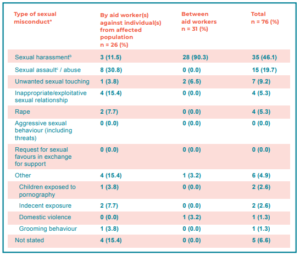 Incident Characteristics according to the Relationship between Victim/Survivor(s) and Perpetrator(s) | Credit: Supplied by ACFID

The report made 31 recommendations which were accepted by all 119 members of the organisation and will agree to an implementation plan for its members in December. The report found that of the 31 substantiated cases, there were six cases of sexual abuse, 17 cases of sexual harassment and eight incidents of sexual misconduct.

Of the six sexual abuse cases, four were perpetrated by overseas partner organisations or sub-contractors and two were not stated. The Victorian Institute of Forensic Medicine (VIFM) said the report covered reported incidents to the review, not overall prevalence.

CEO of ACFID, Mark Purcell, said of the review: “Any case of sexual misconduct is absolutely unacceptable. Our goal is to always keep people safe from risk and harm.

“We have opened up the sector to scrutiny and found the need to make changes in the way our members report incidents of sexual misconduct; to better embed gender equity into everything we do; and to put the experiences of victims/survivors at the forefront of reporting, redress and ongoing support.” 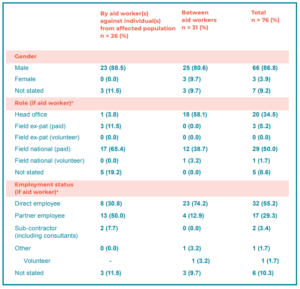 Alleged Perpetrator Characteristics according to the Relationship between Victim/Survivor(s) and Perpetrator(s) | Credit: Supplied by ACFID

The review from VIFM identified capability gaps in the sector and has recommended the Australian Charities and Not-for-profits Commission (ACNC), in addition to support from the Commonwealth Government, establish a Reportable Conduct Scheme.

It said that the scheme would give the regulator and interested parties, including the Department of Foreign Affairs and Trade (DFAT), access to de-identified data which would be beneficial in informing prevention and response measures.

VIFM Forensic Physician and Co-Author of the review, Dr Maaike Moller, said: “Reputation is critical to an aid organisation’s ability to function

“This is why developments in the UK aid sector reverberated so powerfully through the global aid community. When an organisation that purports to do good through its work in assisting the people most at risk is found wanting, it is a hard road to recover public trust and respect,” Moller said, adding that sexual misconduct reporting is encouraged. 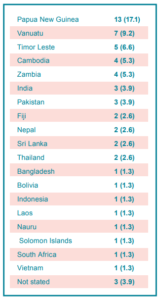 The most common international locations of incidents were Papua New Guinea, Vanuatu and Timor Leste | Credit: Supplied by ACFID

The report made a number of recommendations, including that organisations should be more comfortable with talking about sexual behaviour and conduct with their staff, even those who are deployed to field work and extending this to in-country national staff.

The review found a reluctance to report serious sexual misconduct to law enforcement authorities in international jurisdictions because of concerns about their capabilities. The review recommends that this should be a development priority for Australian aid.

Commenting on recommendations, Purcell said: “Strengthening the reporting system and improving transparency is extremely important for driving prevention and public confidence. Creating a statutory scheme so charities working internationally can report incidences of sexual misconduct to the ACNC will drive prevention and provide a check on whether the new measures we put in place are working.”

Given the likelihood of country nationals underreporting, these statistics may be just the tip of the iceberg.
In order to call this out, we need to start with the language we use; why is a sexual assault/sexual misconduct written up as ‘between aid workers’, implying mutuality and hiding perpetrator responsibility? It is not even consistent. If victimhood and responsibility can be recognised in the first column of the table, it should also be in the second, ie, ‘against another aid worker’.